Cambank was a 3111 gross tonnage steamship owned by Merevale Shipping Company of Cardiff. She was en route from Huelva in Spain to Garston Merseyside with a valuable cargo of copper ingots and ore. Having encountered some rough weather her Captain Prescott put into Falmouth for some repairs to a hatch cover and then continued the voyage.

Arriving off Amlwch, a pilot was taken aboard. About 10 miles east of Point Lynas a submarine suddenly appeared about 250 yards away and without warning sent a torpedo at Cambank which was hit amidships and immediately began to sink.

The Captain ordered the boats to be lowered and 21 of the 25 on board were saved. Three in the engine room were killed outright by the explosion and a fourth was drowned trying to jump from the ship to the boat. The explosion was seen and heard on shore and the local lifeboat was launched to help bring the survivors safely to Amlwch Port and then onto trains to take them to their homes.

There were other ships in the vicinity at the time of the attack on Cambank, but these were left unscathed. The suspicion is that Cambank was singled out because of her valuable cargo which was identified by German spies when loading at Huelva, 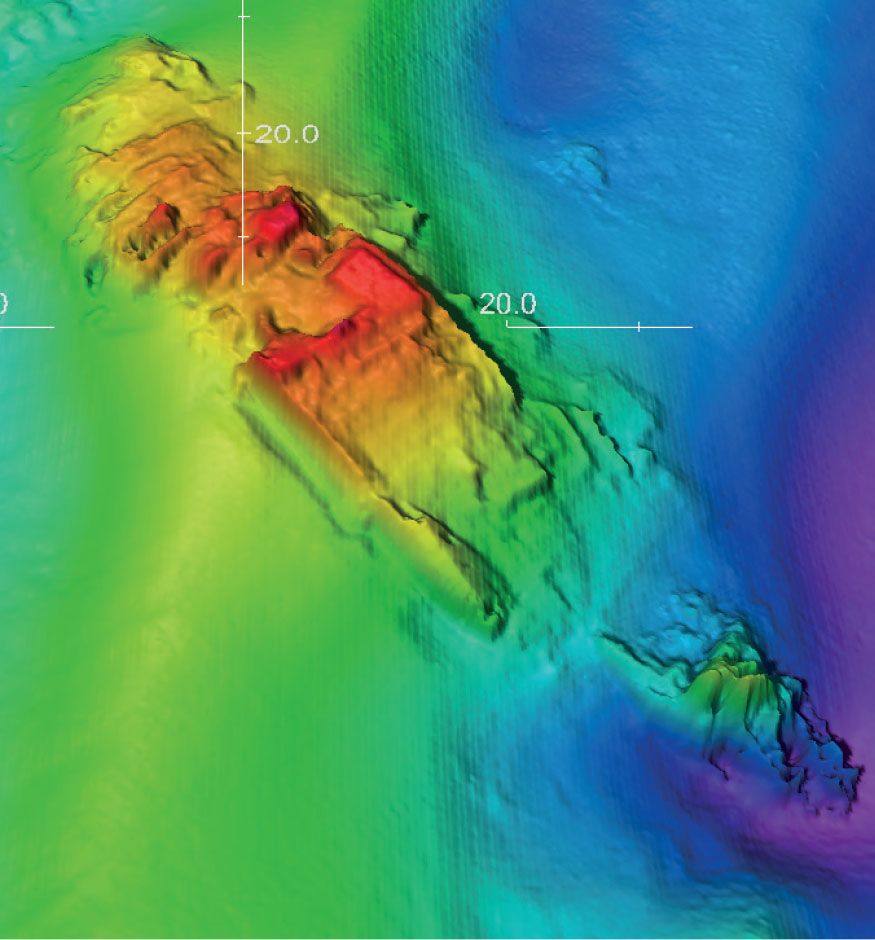 SS Cambank is shown here still lying where sunk. It is one of the wrecks being surveyed as part of the U-boat Project.
Source Centre for Applied Marine Sciences, Bangor Uriversity 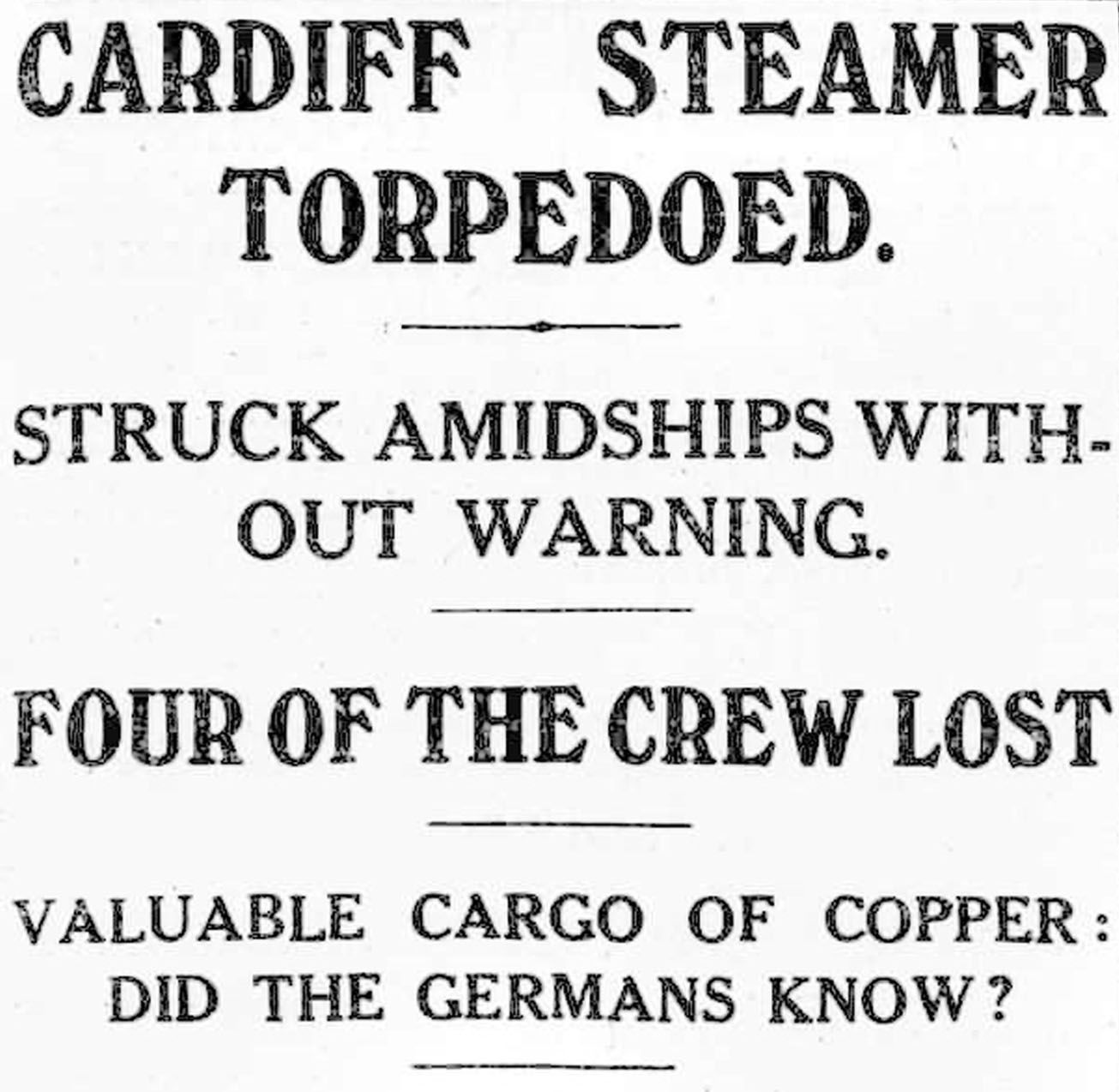 The newspaper listed the Cardiff survivors as:

Other surviving crew members were from Liverpool and Manchester.
None of the casualties were from Cardiff.

On the return to Cardiff of the survivors that lived here Western Mail had a very full report of the sinking including interviews with the Captain, Chief Officer, First Engineer, Mess-Room Steward and another of the crew.

“When the periscope of the submarine was first sighted it was about 250 yards away. As it rose it discharged a torpedo. I tried to get the ship round so that it would evade the projectile but could not do so. The submarine must have been on the look out for us as we had absolutely no chance. The torpedo hit us amidships right under the boiler and the vessel sank in about a quarter of an hour. She split in two and both the stern and stem were cocking as she sank”
He went on to say “I was warned of the presence of hostile submarines and I had the starboard boat slung out. Had I not have taken that precaution none of us would have been saved”

He was asleep in his cabin when the torpedo hit the vessel. When he jumped out of his bunk he was up to his neck in water which swirled around swiftly, knocking him backwards and forwards and bruising him from head to foot. After experiencing great difficulty, he managed to get on deck clad only in his pyjamas and rushed for the starboard boat that was swinging on the davits. As many officers and crew who could clambered into this lifeboat and the davit ropes were cut and the boat fell with a splash into the sea. The men managed to get clear of the steamer before it broke in two and sank.

Mr James commented on the fact that the Cambank was carrying a cargo of copper bar worth £60-70,000 intended for the Rio-Tinto Works and suggested that she was singled out for attack presuming that the Germans had obtained information on the cargo. 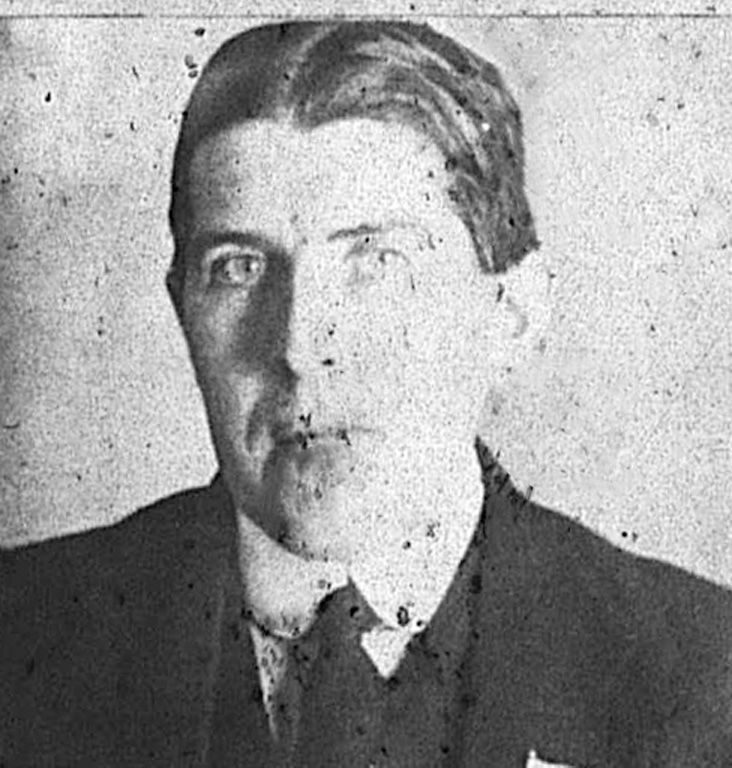 He spoke indignantly of the dastardly conduct of the Germans “It was sheer murder. We were torpedoed without a seconds warning”

“I was in the engine-room at the time and did not see the torpedo. All I remember is a terrific flash and report and then the water came surging round me. I was carried off my feet but by working along the ceiling with my hands I was able to reach the door”
“Think of it!” Mr Conway is reported to have said “We were steaming along on a beautiful morning after a bad voyage and everything was going swimmingly. Ten minutes later there was nothing but pieces of wreckage”

He expressed sympathy for his third engineer, Joe Boyle who had been killed outright along with a fireman and the donkeyman – “The poor chap was the only support of his mother. He lived in Garston and was only a few hours from home”

His arrival home amazed his family, who were not aware of the attack.
His father commented “The poor chap was in a sad plight and was dressed in trousers too large for him, a coat far too small and a pair of boots two sizes too long for his feet. All these clothes were given to him by Amlwch people. He lost everything he possessed.”

Mr Blackmore himself said “Our funnel was blown right away by the explosion. I was finishing my work in the chief's room at the time and the strain on the ship jammed the door. If I ever prayed in my life I did then for the ship was buckling up and it was only after a tremendous effort that I managed to squeeze the door open sufficiently to allow me to pass through. The escaping steam was terrible, and the rushing water was up to my neck. When I got to the sloping deck I had just time to jump into the lifeboat which was alongside. One of the poor fellows who was drowned jumped with me but fell into the water between the ship and lifeboat”

He said he had no intention of going to sea again but would join the Army in order to get his own back.
(He went on to serve in the 1st Herts from Dec 1915 until honourably discharged in Aug 1917 with injury) 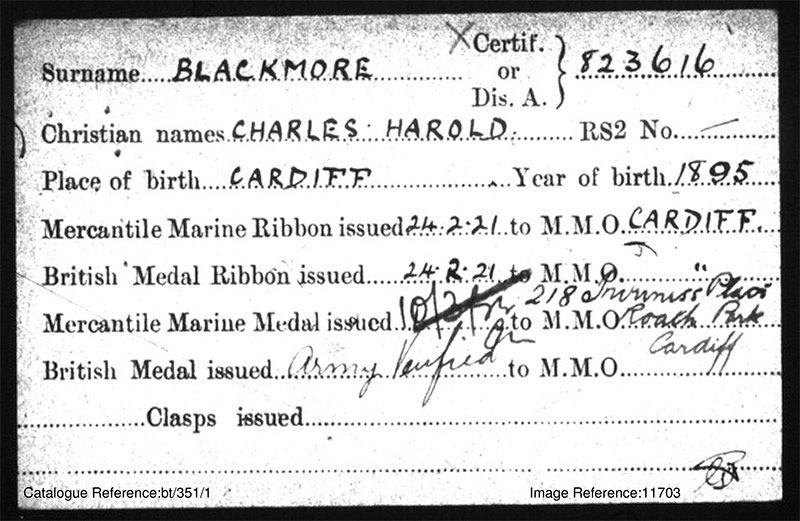 “The attack was made about eleven o’clock. One of the crew shouted ‘There’s a submarine’ and almost immediately the torpedo plumped right into us. We could see it coming like a snake. The explosion was terrible. A huge volume of water and fire reached about half-way up the mast”

“It was a bad voyage from beginning to end, nothing but gales and misfortunes. This is my second wreck. I hope it will be a long time before I go on another voyage”